Mesetina lost her parents at a very young age and was raised by her relatives. Due to poverty she was forced to marry at the age of 10 to any older man three times her age. She has lived with fistula for 19 years. Due to her age she was unable to deliver her 1st baby and she had to be operated on.  Unfortunately Mesetina lost the baby and at the same time developed a fistula.

In the 19 years she had fistula, Mesetina was depressed and unhappy.  She thought of taking her own life a few times but she was unsuccessful. Though her husband was always supportive she still wasn’t happy and she was not happy being married to him as she was too young felt she was cursed by him.  Mesetina accepted that she was going to spend the rest of her life like this.  She spent most of her time alone, as the people in her village did not want her near them due to the bad odour that the fistula caused her to have. She was rejected by her own friends and some family members.

In 2017 one of her relatives heard over the radio about our fistula care centre and she was brought to the centre and cured the same year.  When Mesetina was with us she was amazed to see the number of women that had the same problem as her and she was also encouraged to see some of them were cured, she finally had hope.  After being discharged Mesetina felt so alive and happy, she could not believe that she was fistula free.  Whilst at the centre she also attended the educational classes.  She gained knowledge on how to manage a successful business and learned how to read, write and calculate.

In 2017 Mesetina received a solar charging station that she uses to charge phones. Since receiving the solar she has made MK 170,000 of which she used to pay off her solar loan and to purchase chickens.  She saves the rest of the money for her own up keep.  In 2018 Mesetina’s battery had a fault and her battery needed to replaced. Forcing her to once again rely on her husband to support the family.  Before her battery had a fault she was making Mk 7,000 to Mk 10,000 on average per month from charging phones.  Once it was replaced she was able to once again earn a living from her business.

In 2019 Mesetina was selected to be one of the former patients to be making reusable sanitary pads in her home district as there is a need for them. She received a manual sewing machine and some start up materials. So far Mesetina has had a very challenging year. She lost her husband and was forced to move back to her village to start her new life as a widow. Mesetina has made MK 50, 000 from making pads and MK 20, 000 from making clothes and bags, but unfortunately she used the money to cover her husband’s funeral costs and for her move to her village. The money she is making now she uses to feed herself and wants to save so she can build her own house and have a garden were she will be selling vegetables to the locals.

“You have changed my life.  You have transformed me into a new woman. I will forever be grateful.” 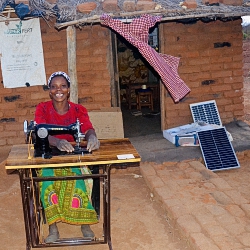