85-year-old Magalena received treatment at Freedom from Fistula Care Centre in Lilongwe, Malawi after being referred to us through her village health centre. Unfortunately, she has advanced cervical cancer and cannot be cured. We worked with our palliative care colleagues and arranged for her to go home for end of life care. Before she was discharged, we had the good fortune to sit down with her and her husband, Sandram Phiri, and listen to their life story.

Magalena clearly remembers the day she started leaking. She’d spent the hours in labour alone with no medical help and no family members nearby.

After the prolonged labour and ultimately a stillbirth, she realised that urine was leaking down her leg. It was, she said, “the worst day of her life.”

Unfortunately, Magalena hadn’t had an easy life prior to losing her baby and developing the fistula. She’d never met her father and was abandoned by her mother shortly after being born. Her aunt took in her and her five siblings and she dropped out of school to work as a for-hire farmhand.

Magalena doesn’t remember when she was born or how old she was when she married her first cousin. She does remember, though that, soon after becoming pregnant, her husband left her, leaving her alone to give birth and alone to deal with the devastating consequences of a fistula.  She thinks she was about 25.

Sandram was born blind in 1937 in the village Madedza. He never knew his father and was separated from his mother at age five. He grew up without a family, living with different village members throughout the years. In 1961, Sandram attended a school for the blind and remained there for several years, learning handiwork and other skills. Towards the end of his education, he was employed by the government to work at the school’s agriculture department.

Sandram met Magalena when he visited Mponera, her home village. They married soon after meeting, and worked for the majority of their lives farming maize and tobacco.

In our interview, Sandram described how he and his wife have always struggled. He has been discriminated against because of his blindness.  She was able to have her first fistula repaired at Queen’s Hospital in Blantyre, only to develop a second one years later because of her cervical cancer. For both of them, life has become harder with age. At the end of our discussion, Sandram and Magalena both fervently agreed that their greatest worry at the moment was their house in their village. They dreaded leaving the fistula centre and returning home.Given the frail state of both the patient and her husband,

The Fistula Care Centre arranged to take them home in our project vehicle. Our driver noted the desperate state of their living conditions and reported back to us. We then took the 80km trip to their village the next day and it was worse than imagined, with one of the walls bowed inward and half of the thatched roof missing and patched with plastic bags. There was no window and it was cold and damp inside. In one corner were ashes from an old fire and a pail of maize powder—this was where they cooked their food. Next to that was a pile of old clothes and straw—this was where they slept. It was almost uninhabitable.

Along with our project director, Mrs. Margaret Moyo, we formulated a plan to help build a structure where they could live.

Over the next two days, we hired a builder from the same village, bought materials, and met with the chief to ask for his blessing. By Friday—less than a week after Sandram and Magalena returned to their village— there was a brand new house with a tin roof, concrete floor, strong walls and a new mattress and chairs for the couple to use.

The entire village came out to watch the completion of the house and many individuals expressed thanks to Freedom from Fistula for allowing their two oldest community members to live out the rest of their lives in greater comfort and dignity. 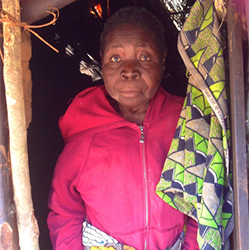