Jana suffered with fistula for 16 years. After being married at the age of 18 she was pregnant with her second child and this pregnancy resulted in a delayed labour. After staying in labour for more than a day, Jana delivered the baby which thankfully survived. However, it was when she returned home that she realised she had started leaking.

Finally, after 16 years, at the end of 2015 Jana was visited by a patient ambassador from the centre who told her of the help that she could receive and Jana got the help she needed in January 2016.

Throughout her time at the centre, Jana attended the classes and said that they have helped her learn how to carry out her work more efficiently. Things like mathematics and writing which were a problem before are now a little easier thanks to the teaching at the centre.

Since returning, Jana’s friends have helped her spread awareness of fistula and when they tell people about fistula they send anyone who they think might have fistula to Jana so that potential patients can hear of her experience and learn from her about the problem.

Jana received a Bboxx when she left the centre and although she is not using it for business purposes, it has helped her family immensely. Her children are now able to do their homework in the evenings and able to read and they are even going to bed later because they charge their phones and then play on them!

In the future, Jana hopes to start a business to sell small food items that she learned to cook here at the centre. We wish Jana all the best in her Fistula Free future.

Jana is 49, married with 5 children and a farmer living in T/A Jatu in the Mangochi District of Malawi 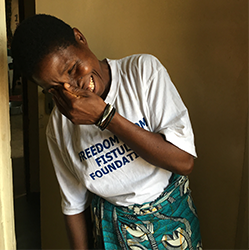