Fryness was married at the age of 20 and has lived with fistula for 16 years. It was during  her 1st pregnancy where she developed a fistula as she was unable to go to the hospital because she had no transport money. She was in labour for 4 days before they could find the transport to take her to the hospital. Unfortunately, she had already lost the baby by this time and was operated on. When she woke from her operation Fryness noted she was leaking urine as her bedding was all wet.  She hoped that this was going to pass as she thought this was a side effect from her operation.

In the 16 years Fryness had fistula she fell into a deep depression and would have even taken her own life if her family wasn’t there to stop her. Fryness spent most of her time alone as the people in her village did not want to be near her due to the bad odour that comes from having a fistula. She was rejected by her friends and some family members. Fryness was lucky to have a supportive husband who stuck by her all those years. For four years Emily visited various hospitals, but she was rarely helped and any treatments she was given were unsuccessful.

In 2014 while she was attending a woman’s church meeting in another district far from her home one of the staff from the Fistula Care Centre in Malawi was raising awareness about fistula and Fryness was able to relate this.  After the gathering she approached the staff, was interviewed and brought to the centre where she was treated and cured the same year.

During her stay at the centre Fryness attended the educational classes.  She especially liked the business skills classes and the arts and craft classes.  She gained new skills which she used to start making home decorations which could then sell to the people in her village.

After being discharged and cured Fryness felt so alive and happy, she could not believe that she was fistula free. She is happy to be able to be doing the things she used to do before she had fistula.  She is now interacting with the members of her community, her friends she missed dearly, and she is able to attend church and community gatherings again.

In 2017 Fryness received a solar charging station that she uses to charge phones. On average per day Fryness makes MK 500 - MK 1,000 from charging phones. Since receiving the solar unit she has made MK 130, 000 of which she used to pay off her solar loan and to purchase a pig and fertiliser and the rest of the money she used to purchase food to feed the family.  Her dream is to have a pig farm where she will be selling pork products to the community. Fryness’s family is happy to be sleeping in lights, they feel safe now.

In 2019 Fryness was selected to be one of the former patients to be making reusable sanitary pads in her home district as there is a need for them. She received a manual sewing machine and some start up materials. So far Fryness has made MK 76,800 from making pads and MK 20,000 from making clothes for both women and men. Fryness has used some of the money to purchase 2 pigs that gave birth to 5 piglets, she also brought 6 rabbits and she has a vegetable garden that she sells the vegetables to the locals. The rest of her money she has saved in the village bank and plans to use to purchase more materials to make pads and clothes. Fryness is extremely grateful for the machine and is happy that she has invested in other businesses.

After Fryness was discharged she felt the need to help other woman that faced the same problem she had. She started talking at community gatherings and sharing about her experience as a fistula patient and encourage the people who have this problem to come fourth, so they can receive treatment at the centre. Fryness was trained in 2015 as a patient ambassador and received all her training materials to use to raise awareness about fistula in her community and a bicycle to reach patients in very remote areas. So far Fryness has brought 29 patients, all of which have been cured.

“I am grateful to Freedom From Fistula for transforming my life.  You have helped me to start 2 businesses.  I am able to provide food for my family. You have brought peace and joy back to my life. God bless you always" 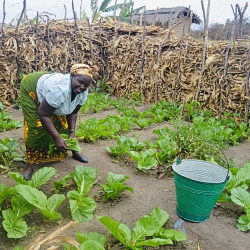