Eunice got married at the age of 20 and has lived with fistula for 21 years. Her fistulas developed in 1996 during her 5th pregnancy which was complicated.  The nearest health centre was not able to assist her and she was referred to the district hospital.  Sadly, it was too late. When they operated on her the baby had already passed and her uterus was so badly damaged that the doctors had to remove it.  Due to her obstructed labour she was also left with a fistula.

Having a fistula meant that Eunice was now looked down upon and isolated by the people in her community. She fell into a deep depression and lost nearly half of her body weight as a result of the shame and embarrassment she felt.

After visiting many hospitals she was given hope in 2017 when the district hospital referred her to our Fistula Care Centre in Malawi.  Eunice was operated on and she was finally fistula free.  Eunice is a happy lady and is enjoying her married life again.  The fights she used to have with her husband have stopped and her husband is back home, being supportive and helpful.

In 2017 Eunice received a solar charging station. On an average day she makes MK 500 – MK 700 per day.  So far, Eunice has made MK 282, 000 just from charging phones. She used the money to put her children in school of which 2 are in high school and 1 is in university.  She also repaid her loan with the same money and bought a pig.

In 2019 Eunice was selected to be one of the former patients to be making reusable sanitary pads in her home district as there is a need for them. She received a manual sewing machine and some start up materials. So far Eunice has made MK 60, 000 from making pads and MK 10, 000 from making clothes for both women and men. Eunice’s daughter helps her mum by selling the pads at the school they go to.  She uses the money to pay for school fees and also help her son who is in college on a scholarship.

Eunice’s dream is for her children to finish college and have good jobs so they can help the people in her village.

“I am so thankful to the fistula team for curing me from fistula. I am now an independent woman and you have transformed my life.  I used to be an outcast and living in poverty when I had fistula and that’s no more. God bless you and continue the good work you are doing.” 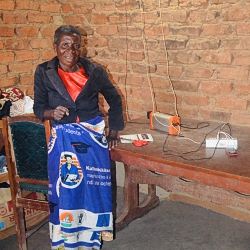