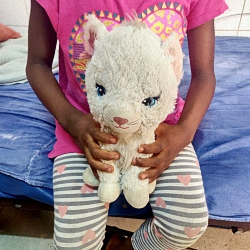 Staff at the Aberdeen Women’s Centre (AWC), a busy hospital caring for women and children for free, see Female Genital Mutilation (FGM) on a daily basis. Based on statistics ranging from 2008 to 2019, 89% of AWC’s fistula patients and 65% of AWC’s maternity patients have FGM. With the data on FGM being sparse in Sierra Leone, the information AWC collects is vital to gain a picture of the prevalence.

Marie* is a 5 year old girl who was enjoying her Christmas holidays staying with her Grandmother in the provinces. As FGM is a traditional practice in Sierra Leone,the Grandmother decided it was time for Marie to undergo this procedure. The Grandmother did not ask Marie’s mother’s consent but went ahead and cut off her clitoris.

Immediately, the girl started to bleed profusely and the Grandmother took a mixture of local herbs and put them directly on the wound. She then tied a piece of local cloth around the girl, to stop her bleeding. These actions ultimately caused a serious infection, with some blood escaping to Marie’s urethra. This blockage of the urethra resulted in extreme pain for Marie when she urinates, as the canal is too small to release the urine.

For a few days the Grandmother left the girl, believing the girl would heal but her condition only worsened. It was not until Marie was in a dire state that she took her to the local hospital, who then referred her to the Aberdeen Women’s Centre (AWC) in Freetown, where she was reunited with her mother.

On arrival, Marie was so ill the international doctor thought she would die and her Mother believed she would not make it through the night. Marie was now suffering from sepsis and tetanus caused by the infected ureathea. Her body was extremely stiff and was constantly spasming. Marie had to be put in a separate ward, where it was darker for her, and was immediately put on medication and 24/7 monitoring. Marie could not sit, eat or speak.

Three weeks later, Marie has made an amazing recovery. She has regained her movement and speech and can now feed herself. She can often be found playing with the other children admitted at AWC and cuddling her toy cat, which was given to her upon arrival. Marie still has extreme pain when urinating and is extremely traumatised by her ordeal.

Marie’s condition was likely caused by dirty instruments being used to cut her during the FGM procedure. If Marie had not reached Aberdeen Women’s Centre when she did, she would have died. FGM is a harmful practice and has severe health implications for all who undergo it, especially children.

*Not her real name

On this International Day of Zero Tolerance for Female Genital Mutilation (FGM), it is important we remember stories like Marie’s and serve as advocates for a safer environment in which women and girls can live.