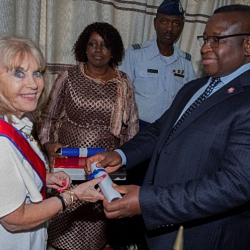 His Excellency President Julius Maada Bio has decorated Dame Ann Gloag with the Grand Commander of the Order of Rokel, GCOR, Sierra Leone’s highest and most prestigious decoration, for her work with women and children.

The ceremony at State House also recognised the Scottish billionaire businesswoman for her dedication to transforming the lives and fortunes of tens of thousands of women and children through her philanthropic work across the country.

Among other projects, Madam Gloag founded the largest Freedom from Fistula project at the Aberdeen Women’s Center in Freetown. As a consequence of her work, each year 22,000 children are assured of outpatient clinical care, nearly 300 women a year are being healed and saved from the psychological stigma and other cultural and economic consequences of fistula.

Responding to the award, Madam Gloag said she was honoured to have received the recognition as a sign of appreciation from the people of Sierra Leone. She said working in the small West African nation had been a pleasure as she was able to see women considered as outcasts being brought back to society. She said she was blessed to be able to serve her fellow humans and expressed the belief that with partnership a lot more could be achieved.

On his part, President Bio said:

“You have worked for this honour and you deserved it. As a nation, we are showing our sign of gratitude to you for all that you have done for our women and this nation. Going forward, I see in you a partner so that we can help the many that need our service. You can rest assured that we will also provide the support that you need to be able to do more work as you promised”.